Arguments for and against the plausibility of the theory that all of Governor Connally's injuries and all of President Kennedy's non-fatal injuries were caused by one bullet.

22 November 1963: A Brief Guide to the JFK Assassination is the essential JFK assassination book.

It is available as a paperback and ebook from Amazon (USA, UK, Canada, Australia, and more) and Google Play.

The case against Lee Harvey Oswald required the creation of what became known as the single–bullet hypothesis or single–bullet theory.1

The single–bullet theory was developed in three stages:

The FBI’s report into the assassination matched the wounds to the three bullets in the following way:

The Warren Commission modified this explanation by assuming that Kennedy’s throat wound had been caused by the same bullet that had caused his back wound.

When the wounding of the bystander, James Tague, was unexpectedly made public, the commission became obliged to use the only plausible explanation that would account for all of the wounds having been inflicted by just three bullets:

Evidence for the Single–Bullet Theory

Two aspects of the evidence suggested that the single–bullet theory was plausible:

Objections to the Single–Bullet Theory

Although objections were raised to all of the important parts of the Warren Commission’s account, the most powerful objections were aimed at the most fundamental part, the idea that all of Kennedy’s and Connally’s non–fatal wounds were caused by one bullet.

If the single–bullet theory is false, at least one shot must have been fired by someone other than Oswald. In other words:

Governor Connally testified to the Warren Commission that the bullet which struck him in the back was fired later than the bullet which caused at least one of President Kennedy’s non–fatal wounds. Connally maintained for the rest of his life that he was struck by a separate bullet, after Kennedy had already been wounded.4

Two Eye–Witnesses to a Second Bullet

Two of the closest eye–witnesses were Governor Connally’s wife, who was sitting to his left, and James Chaney, the police motorcyclist who was riding to President Kennedy’s right. Both independently claimed that Connally’s back wound was caused by a separate bullet.5

The Zapruder Film and Evidence of a Later Bullet

This was consistent with the evidence provided by the Zapruder film. The film shows President Kennedy emerging from behind a road sign at about frame 225, with his hands reaching to his throat. He has clearly been shot by this point. Indeed, the single–bullet theory demands that he has been shot by this point. The Warren Commission claimed that Kennedy had in fact been shot two–thirds of a second earlier, at frame 210, the instant at which he became visible from the easternmost sixth–floor window after being hidden behind an oak tree. Connally, however, shows no sign of being shot in the back until two–thirds of a second later, at about frame 238, when he starts to twist and fall to his left.6

This bullet arrived much too late to have been the one which wounded Kennedy, and much too early for both to have been fired from the rifle attributed to Oswald.

The governor of Texas was holding a cowboy hat in his right hand. Both the hat and the hand are visible in the Zapruder film intermittently for several seconds after Kennedy comes into view while clutching at his throat. As late as frame 268, more than two seconds after frame 225, Connally’s hand is gripping his hat tightly, his shirt cuff white and free of blood. Clearly, he has not yet been hit by the bullet which clipped the end of his jacket sleeve, passed through his shirt cuff, then shattered the radius bone in his wrist and severed the tendon by his thumb.7

President Kennedy was sitting upright until he was shot. His throat wound was far too high, or his back wound far too low, for them both to have been caused by one bullet from the Texas School Book Depository’s sixth floor, which was sixty feet above the road.8

The Location of JFK’s Throat Wound

The throat wound was located just below the Adam’s apple and just above the knot of the tie. Dr Charles Carrico, who saw Kennedy’s throat wound before it was distorted during a tracheotomy and before the president’s shirt and tie were removed, was asked to point to the location on his own throat. His questioner clarified the location for the record:

Mr Dulles :
And you put your hand right above where your tie is?

The Warren Commission preferred to place the bullet wound about one inch lower, just below the level of Kennedy’s collar button. This location is contradicted by:

There were several slits in the president’s jacket, tie and shirt, but all of them are consistent with having been made in the hospital’s emergency room by nurses using scalpels or scissors to free the patient’s clothing. The two cuts close to the collar of the shirt did not match each other, as those caused by a bullet would have done.10

JFK’s Back Wound was too Low

It makes no practical difference whether President Kennedy’s throat wound was located at or just above the knot of his tie. The balance of the evidence places his back wound several inches lower than either location.12

The Back Wound was Lower than the Throat Wound

Because bullets can sometimes veer off in unexpected directions on striking an internal object after entering a body, it is conceivable, though unlikely, that a bullet from the sixth floor of the TSBD hit President Kennedy in the back, veered upward, and passed out of his throat.

Unfortunately, a bullet following an upward trajectory could not have caused any of Governor Connally’s injuries, as the single–bullet theory demanded. The unavoidable implication is that Kennedy’s back and throat wounds were caused:

It also follows that at least one further bullet is required in order to account for Connally’s wounds.

The Status of the Single–Bullet Theory

These three factors came together to suggest strongly that the essential part of the Warren Commission’s case, the single–bullet hypothesis or theory, was not only unsupported by the evidence but was actively contradicted by the evidence.

The failure of the single–bullet theory proved that Oswald could not have committed the crime alone.

By the Same Author

If you found this article helpful and informative, you will enjoy 22 November 1963: A Brief Guide to the JFK Assassination.

Get the ebook on Google Play:

These locations allow us to test the plausibility of the single–bullet theory. The question is whether both garments could have ridden up sufficiently for their holes to be consistent with a shot that:

The FBI calculated the angle from the easternmost sixth–floor window to Kennedy’s upper back. After making allowances for the slight downward slope of the road, it was determined that any bullet fired between frame 210, the first instant at which a sixth–floor gunman could have seen Kennedy, and frame 225, when Kennedy can first be seen to be injured, would have travelled downward at an average angle of 17° 43′ 30″ to the horizontal.18

We can represent the implications of a downward angle of about 17–18° by using a model. President Kennedy’s exact position in the car is not known, but an examination of still photographs and the Zapruder film allows certain assumptions to be safely made: 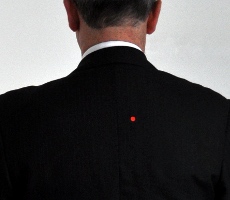 The following photograph, taken by Phil Willis at the same time as frame 202 of the Zapruder film, shows that the jacket was in its normal position less than half a second before Kennedy came into view from the sixth–floor window:19 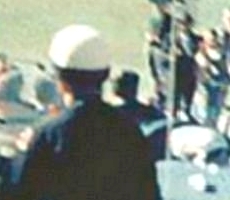 With the shirt and jacket aligned normally, the holes are far too low for the hypothetical bullet to have come out of the throat at the required angle. The bullet holes would have had to be about four inches higher, close to the level of the collars: 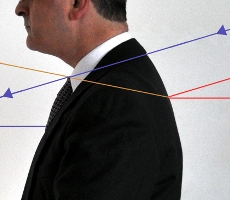 Some photographs, taken further from the time of the shooting than the Willis photograph, show the right shoulder of the jacket slightly raised as the president waved to the crowd. Even with the arm in this position, the bullet hole is much too low: 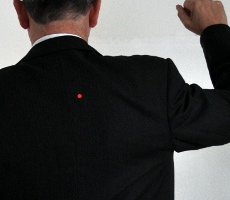 For the bullet hole to approach the level of the shirt collar, the back of the jacket would have had to ride up far beyond the level shown in any photographs of Kennedy during the motorcade: 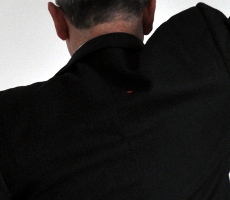 The Bullet Hole in the Shirt

Buttoned–up shirts are generally much more restricted in their movements than are jackets. Even if the jacket had ridden up sufficiently to allow a bullet to enter the president’s back near the level of the collar, the shirt could not have done so: 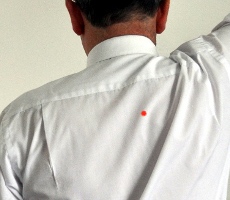 The known location of the hole in the shirt is not consistent with a hypothetical shot from the easternmost sixth–floor window that came out of Kennedy’s throat.

The Truth, the Hole Truth and the Single–Bullet Theory

No doubt the physical dimensions of our model, and the physical properties of his clothing, differ from those of President Kennedy. But any such differences are surely insignificant. It is clear that the hole in Kennedy’s jacket, and especially the hole in his shirt, could not have been caused by a bullet entering his back at an angle of 17° or 18°, continuing in a straight line, and coming out of the throat just below the Adam’s apple.

The location of the bullet holes disproves the single–bullet theory.

The original photographs on this page are issued under a Creative Commons Attribution Share Alike licence, which means that you may use these images for any purpose, whether personal or commercial, provided you:

Whether you are an expert or a beginner, this essential book will help you make sense of the JFK assassination:

“A must read for any serious JFK researcher … well written, comprehensive and concise.”
— Bob, NJ on Amazon.com

“Excellent. Factual, precise and clearly written. A really great introduction to the complexities of this case.”
— Francis on Amazon.co.uk

These are the publisher’s prices for the ebook (e) and paperback (pb):

To find out more, visit the book’s page on your local Amazon website:

You can get the non–Kindle (.epub format) ebook on Google Play:

Read more about the single–bullet theory: